The site will be down for maintenance this Saturday, March 3 starting at 10 AM PST.

Both the website and IRC will be offline during the maintenance. We will be back online as soon as possible. Please pardon the interruption.

We're updating our system which manages user presence information, including many bug fixes for showing who is online in channel.

Update: The site is back online now!

Hopefully presence information will now be much more accurate. If you see anything fishy, you can help us fix it by let us know at team@grove.io.

Two months ago we launched our first service integration: Github. Since then we have had many requests for other developer platforms. I'm happy to announce that we're adding three new services today: Bitbucket, Heroku and Pivotal Tracker.

You can see the configurations for these in your channel's settings page (Service Integrations) and read more from our help section. Also GitHub is updated as Grove is now listed as a pre-configured service hook.

We will be adding more integrations in the future. You can also build your own with our webhooks API. It's been fantastic to see wide variety of community driven projects and we're now listing them here. 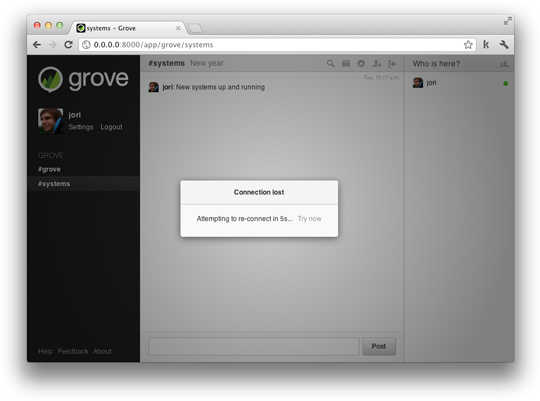 Flaky wifi and sleepy laptops can make your chat go offline without you knowing about it.

Now the Grove web client will give you a clear indication if your connection has been dropped. Grove will also keep trying to re-connect you so you can pick up where you left off.

Thanks again for everyone who suggested this feature. We all get flaky wifi sometimes so we hope you like it as much as we do.

Posted by Leah Culver on 1 February 2012

Want to see the lastest messages in your channel directly in your IRC client? Now you can simply use Grove's custom HISTORY command to playback recent messages in a channel:

You can even specify the number of past messages you'd like to see (up to 100):

To playback messages that have mentioned your name, you can use:

There's also a new setting to playback your channel history when you first connect to Grove. Configure this option by selecting 'Playback last 10 messages in my IRC client' in your account settings.

Thanks to all our early users who have suggested this feature! 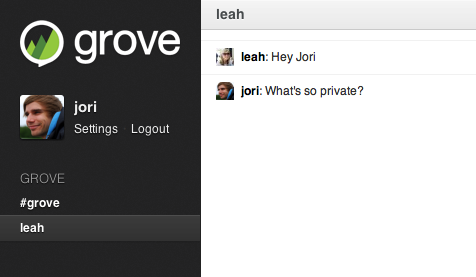 Grove is great for chatting with your team and now it's even easier to talk with just one person.

Today we've added the ability to private message another user from the Grove web client. Simply click on the user's name to start a new private conversation.

Private conversations are logged just like regular channels. If you're not online, you'll get an email notification when someone sends you a new private message. This makes it simple to keep up with what's going on.

Private messages aren't totally new - they've been a feature in the Grove IRC service for a while now. We're just excited to bring private messaging to the web client and make one-on-one chatting super easy!

Integrate GitHub and other web services with Grove

Here at Grove, we're big fans of GitHub and their products are an essential part of our workflow.

That's why I'm so excited to announce that you can now get your GitHub commits directly in your chat stream with just few clicks.

To get started, you'll need to go to your channel settings and follow the instructions in the GitHub integration tab. It's super simple - you just need to copy and paste one URL in your GitHub repository admin.

Want to post a notification from another service? Grove now offers generic support for posting service messages to your channels. All it requires is a simple HTTP POST.

It's the easiest way to add notifications. No bots required.

You can post any message with a custom service name. You can also add an optional icon and link that will appear in the web client and in the archives.

We hope that you love these notifications messages as much as we do!

And if you're looking a simple way to add a custom bot for Grove, remember to take a look at Hubot.

Sorry for the downtime

Posted by Leah Culver on 8 December 2011

We've had some problems over the past couple of days which resulted in dropped IRC connections and downtime for Grove. The website (as well as IRC) was down for about an hour around 8:20 AM PST yesterday and 6:30 AM PST today.

After some investigation we discovered that our Redis logs had filled the entire disk on our Redis server. This caused both lost connections and downtime for the site. We have since cleared out old logs and set up log rotation to prevent this problem in the future.

We are so sorry that this occurred and that it resulted in downtime and connection problems.

Hubot is an awesome and extendable bot created by the cool folks at GitHub. While Hubot was originally created for Campfire, there's now adapters for different platforms including IRC, so it works nicely with Grove. The easiest way to deploy Hubot for Grove is to use Heroku for hosting.

To get started you'll need to sign up a new user to your organization. Register an account with the username you want your Hubot to be called. I went with simply grovebot. Here's how you can deploy the bot manually but if you want you can use Tom Bell's Hubot Factory which will do most of the heavy lifting for you.

To install Hubot, you'll first need to have CoffeeScript and npm installed. The web is full of instructions for installing both so we won't cover them here. Start the installation by cloning Hubot and creating a new instance.

Now you need to add hubot-irc in the dependencies by editing the package.json file.

Next modify the Procfile to match the following (remember to replace grovebot with your bot's name).

Save both files and commit changes. Now it's time to deploy the app to Heroku (again, change grovebot to match your bot's name).

Next configure your Hubot to work with Grove's IRC interface. Use your organization's and bot's information.

Once you're done, fire up your Hubot.

Now you should see the newly created Hubot join your chat rooms. Your Hubot should reply to you if you call it by name.

If it doesn't reply, something is wrong and you can get more information with commands.

To read more about deploying Hubot, check out these guides:

Big thanks to Tom Bell who has contributed to Hubot by creating Hubot Factory and maintaining its Wiki. He also helped with this guide.

First, we've added the ability to turn off archives for a particular channel. When you create a new channel (or edit an existing one) just select the option to "Turn off archiving for this channel". No messages will be saved to your archives (or on our servers). If you want to turn on archiving again later, you can do that too.

Second, you can now delete individual messages from the archives. You can delete your own messages or any message if you're an owner of the organization. So don't worry if you let some private information slip - just delete it!

We've been listening to your feedback and have added several new notifications:


We're really excited about these new notifications and we hope that they will keep you better up-to-date on what's going on in your organization.

We're excited to announce that Grove is moving out of beta!

During our beta we have had over 2,000 organizations sign up to test out Grove. You've sent us your feedback and we've been working hard to fix bugs and add new features.

Thanks so much for trying Grove during our beta.

You've probably noticed that the Grove web client and archives display the time in your local timezone.

Grove detects your timezone using JavaScript and matches the time with your web browser. This means you don't need to set your timezone - it should just work automatically!

Recently we fixed a bug with how we're detecting your timezone, so please let us know if you're seeing the wrong time.

We also added the ability for you to view the time in 24 hour format. You can update your preference here: https://grove.io/accounts/settings

We're really happy to have so many people using Grove from all around the globe!

Lots of people have been asking us about our pricing plans so we'd like to give you all a sneak preview:

Note that you can't actually sign up for any of these plans yet. So enjoy the free trial and let us know what you think!

Invite all your team members

We've updated our invite system to work better for teams.

First, we've added the ability to invite multiple team members at once by creating a custom invite link. From the organization members page, just click on "Create invite link" to generate a special invite link which is valid for up to three days.

We've also fixed a few bugs with signing up by invite, so everything should be working much better now.

Thanks for sending us feedback and bug reports about invites! We hope you can now easily invite your whole team. 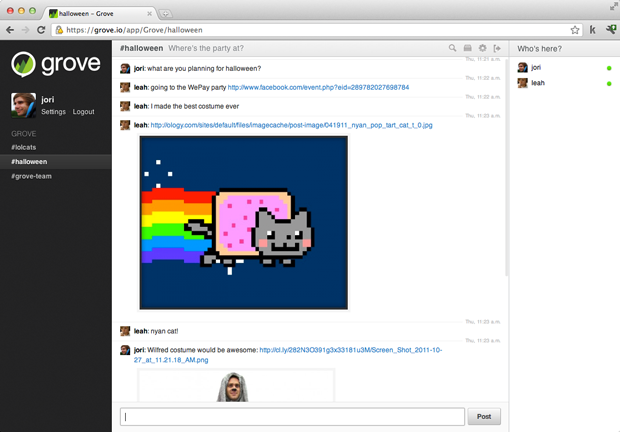 Today we're happy to announce that you can now connect to IRC channels on Grove via our updated and improved web client.

While we're still an IRC-first company, we understand that not everyone is comfortable configuring a desktop IRC client. There are also situations where a web client can come in handy like behind a firewall or when using someone else's computer.

With the design of the web client, we wanted to keep the user interface as clean as possible. This allows you to focus on the discussions without having too many distractions. 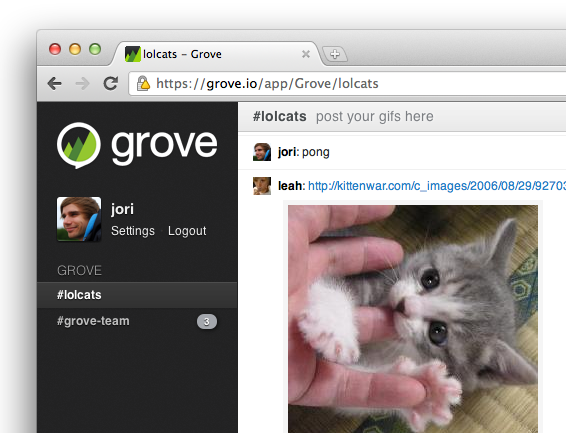 To keep things snappy, the webapp is built in JavaScript using Backbone.js. This means that actions like switching between channels, changing the channel topic, and toggling the contact list is all done without reloading the page. If you're interested in how we're using Django and Backbone.js together, Leah recently spoke about it at PyCodeConf.

To access the web client, head over to your organizations dashboard and click the "Open web client" link. Just like our IRC servers, the web client uses SSL, so your secrets are safe.

This is a big feature for us, so let us know what you think! You can reach us at team@grove.io and @groveio.